ESPZEN Yellow got their first win of the season with a hard-fought victory over In-Sports Development. The teams were even for much of the match and both created chances. In-Sports took the lead with a stunning volley from outside of the box. But ESPZEN continued to work hard and eventually got a goal when Ben Holmes got on the end of  Zac Weaver cross to equalise. Zac Weaver then got the winner himself after a fantastic pass from U12 debutant Nathan Mao. Captain James Wilford, who had a fantastic game, selected Oscar Lovik as the man of the match because 'he was a rock at the back' 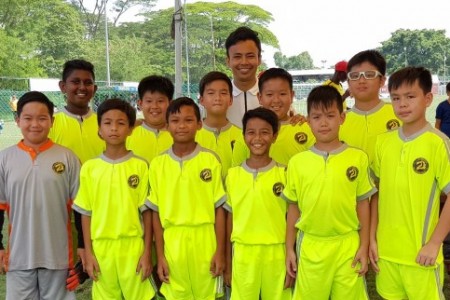 For Match Week 2, the In-Sports Development boys were looking forward to improve on their past week and notch up their first win of the season. The boys welcomed a new team mate - Syaraf into the team and started the game positively with some neat passing against ESPZEN Yellow. 14 minutes into the game, they deservedly took the lead as kyan laid a pass into the path of Syaraf, who volleyed the ball delightfully from the edge of the box into goal. As the game resumed, the In-Sports boys continued their game of possession coupled with neat passing that carved out many chances. Kyan, Mika and Thaddeus all came close within a whisker of the goal or saw their shots blocked at the crucial moment. In the 30th minute, the ESPZEN boys clawed back and scored the equaliser off a corner as their forward found space to get a touch on the cross. As the game resumed, the In-Sports boys threw players forward to regain the lead but could not get the crucial finish on goal. As In-Sports pressed forward, the ball was cleared far from the ESPZEN goal line and their players lined up a counter attacking move and took the lead as In-Sports' defence was stretched thin. As play resumed, In-Sports pressed hard to break down the ESPZEN defence, who at this time resolutely defended by putting players behind the ball until the final whistle.