With the ESPZEN coming off the back of two massive wins against the two best teams in the league they were buzzing with the fact they were league champions which eased the pressure going into the last game against one of our own ESPZEN Yellow.

The game was set to be a thriller and doubt surrounded the black team with the heat at J league and energy exerted in the opening two games, this was always going to be a challenge.

Coach Dennis got his team selection right, starting Joshua Boffey and Isaac Pizano I knew they would pose a threat, Ethan Wan was on the attacking line who has been one of the most improved players throughout the U9 section this season.

The game was end to end in the opening minutes, ESPZEN black rushing their decisions and making mistakes due to the fact they did not want to lose to the yellow team. The game swung heavily in the favor of the yellow team who were stronger in the tackle and cleverer in the early stages. The looked fresh and I knew straight away the black team were in for a fight.

The first goal come from Joshua strength and speed in central areas of the field. He was brilliant throughout the whole game leading by example and having a real go at the black team. The Yellow team went 1.0 with a mistake in the midfield, the ball was pumped into the box and turned in by the yellow team. A shock to the system and something needed to wake the black players up which I felt was needed but considering their energy levels regular subs were needed.

The game finally settled and dangerous players such as Archie Hare, Yuki, Isaac and Nathan all started to see the ball more. Marcelo looked to be playing as a team and passing the ball well and you could see the black team gaining in confidence at the 15 minute mark. The game had changed all of a sudden the belief of the black team were there to see, the coach giving instructions to be brave and keep passing the ball instead on constantly dribbling the ball which was wasting energy and in heat that was not what the black team needed in their 3rd game of the day.

Chances started to be created by Nathan Mao who won Manager Player of the year for his excellent performances this season, his intelligence and skill beat the yellow team and his goals and assists but clear day light between the two teams. It was a shame to see the ESPZEN Yellow teams spirits deflate as they had played so well however the black team just had too much to offer and broke down the yellow team to in the end win the game comfortably.

It was a fantastic spectacle to see how far these two teams have come from the start of the season and with been Coach Lee B last season with ESPZEN, I am very proud of the U9 section and believe next season they will continue to strive and with the two teams doing so well, I will look forward to seeing them challenge for the title next season. 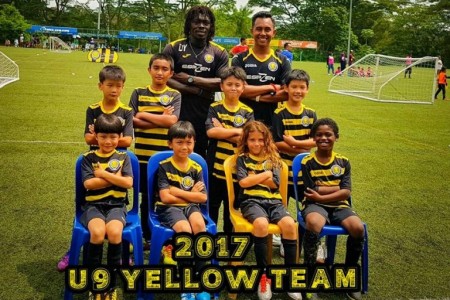 Last game of the season see us going against our own ESS Black and a good start from the guys where Joshua got the 1st goal in the 4th min of the game, as we know with the pace of the Black team thy came out strong and got their 1st and added the 2nd this time both teams started getting it hard and playing some good football and you could see both teams moving the ball very well.

As time goes by and we started playing and opening up well and lot of chances were missing and you know once you miss your chances you pay for it.

ESS Black add 3 more to make it 1-5 at this time before Joshua got his 2nd to make it 2-5 and 3 clear chances again for Ethan to bring us back but he could not finish it.

ESS Black got good 2 one on one with our GK Rafael who stand strong on both time to keep his team on.

It was a good game of football from both teams where you can see both teams showing how strong they are and how they can play as a team.

Isaac was the captain and his MOM goes to Joshua for his 2 lovely goals and his hard work shown.