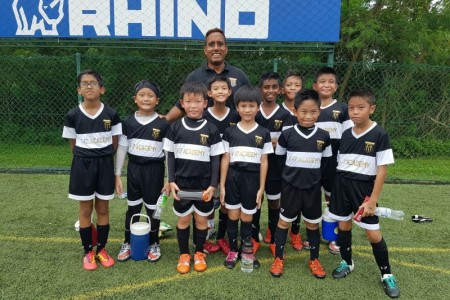 After his strong performance in the previous match, Iman was handed the Captain's armband for this tie against ESPZEN Yellow. And he didn't dissapoint... inspiring the team with his effort and determination.

We were caught out on the counter on several occasions, though, falling behind and looking out of the tie. But a quick team huddle at the water break worked wonders and the team appeared to regain a measure of confidence lacking from the opening exchanges. Aniq was inspired in goal, thwarting attacks almost single-handedly at times. And his efforts were rubbed off on therest of the team...

Josevic put the dissapointment of not converting a good chance behind him (it was a good save by their 'keeper), kept the attack going and played Cleophas in on goal with a clever pass, which Cleophas tucked away calmly. Barely catching their breath thereafter, some good pressure on the ball-carrier by Cleophas led to a misplaced pass which Yael latched on to, chipping the 'keeper to raise hopes of a grandstand finish.

Tails up, we pressed forward looking for goals, but ESPZEN Yellow defended resolutely to preserve their lead. Good match to watch, certainly exciting and some valuable footballing lessons from this one.

3rd game of the day see us going out against F-17 Young Lions on the carry over game due to lighting and rain some weeks ago.

It was an outstanding performance from the guys going all out and giving all they have to get the point out..

From the GK to the forward players all the guys give all they have passing and dribbling skills was outstanding as we stand strong from start to the end..

A good and welled played game from both teams but ESS Yellow  got the whole 3 point  of the day..