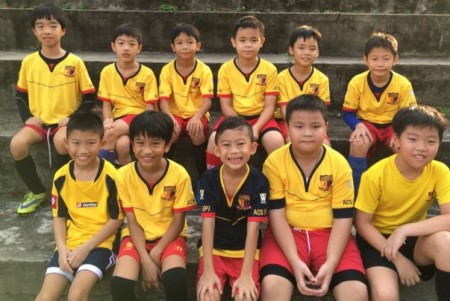 With only a short rest period after the first match, the 8 Barker Boys were once again back in the thick of the action. Although we were playing the same opponents, F-17, we did not have the luxury of depth in the squad like the opponents. The boys had to dig deep for this one.
With some positional changes within the team, the boys started on the note that they ended the earlier game on, with a flurry of attacks! In no time, we managed to breech their defence and scored, thanks to Elliot’s good positioning and finishing ability! As heat and fatigued reared it’s ugly head, a single momentary lapse in concentration and communication amongst the boys allowed F-17 to equalise via a ‘soft’ goal. With some tweaking of the positions, we were soon back and launching attacks on the opponent’s goal led by Matthew’s tireless running in midfield. Once again, it was the woodwork, goalkeeper and numerous bodies that prevented us from taking the lead again. Going all out for the win, we were caught on several occasions by the swift counter attacks and it was the combined efforts of our backline, Ian, Joshua, Valens and of course our goalie, Valentine, that kept them at bay. In the end, we had to settle for a draw.
Nonetheless, it was a giant performance by the boys who had to juggle their exams preparation, sweltering heat and ceaseless running to bring home the precious 4 points! Man of the Match goes to Valens for the 2 crucial tackles in front of the goal to snuff out the goal bound attacker. 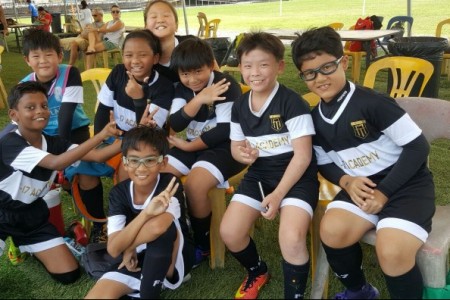 After succumbing to a late goal in the previous match, the players picked themselves up, regrouped and faced the Barker Boys again.

Barker Boys scored earlier this time round, with Andersen (rotating in goal) unable to keep the goalbound effort out. At this point, it seemed that we'd reached our limits and would crumble under the pressure...

But the players had other ideas. Their commitment to sticking together and working as a team is commendable. And they

rallied to finish strong and finding a late, late equaliser through some positive play.