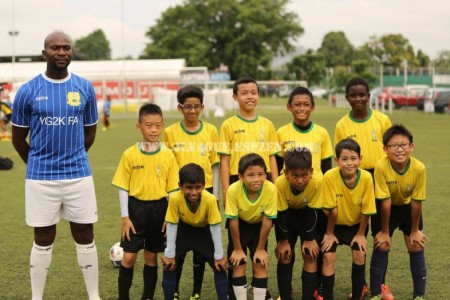 The matchday happened to be the PSLE weekend where some of the boys were be having their school examination on Monday/Tuesday but the turnout was wonderful and Coach have a strong squad present for the game.
The match started with YG2K exerting their usual level of quick pressing and control over proceedings, forcing the ball back into Team Neymar’s half and, within the first few minutes, created a few chances which our attackers failed to convert.
Rizwan finally got the breakthrough , reacting quickest to a rebound and blasting it past the keeper.
It was 1-0 and our boys continued to enjoy the majority of possession and quality attacks thereafter, with the only exception being a well-worked counter-attack by FCBEscola that ended with the Team Neymar’s striker sending a well struck and precise shot from an angle inside the area past Travis.
The goal wouldn’t spark an Team’s Neymar comeback however. FCBEscola’s side, though stuffed with some skilful and strong boys from back to front, couldn’t overcome YG2K’s midfield press or wide play. YG2K’s boys looked to be getting closer and closer to re-taking the lead as the game wore on.
Surprisingly, it was our defence lynchpin, Izzy that would be the man to secure and restore the lead via a superb goal. Izzy intercepted a pass from the defensive end , made a long and wonderful run towards the opponent’s box. He laid the ball for Ridwan and Ridwan relayed the ball back into Izzy’s path to slot the ball past the keeper.
From then on, it was Cristos’ show with a well-worked assist and 2 goals!
Cristos found Tim in a good scoring position and timed his pass perfectly for Tim to find an angle using his weaker left leg to make it 3-1.
Cristos showed his quick thinking and silky skills via good interchanges of passes with his teammate and released Abraham on the left.Abraham drew the defenders to him and laid the ball for the irrepressible Cristos to put the ball into the net.
The boys was showing great form and he scored probably the team’s best goal thus far in the competition. The boy managed to win the ball in midfield and he was weighing his options but found no immediate support.
With a push of the ball forward and a sudden acceleration , he generated enough momentum to release a thunderbolt shot to add another goal into his name.
Final goal came when Jonan danced past the defenders to the left byline and found the on-rushing Abraham for a wonderful finish to make the final scoreline 6-1.
Final score : 6-1 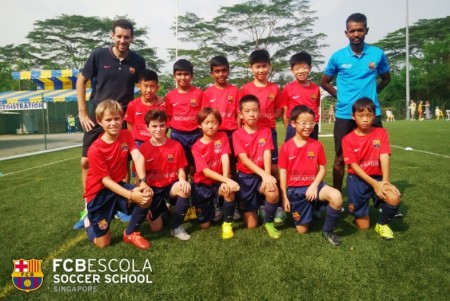