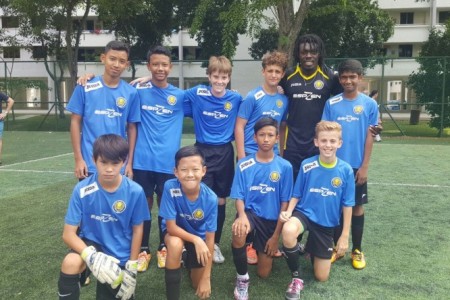 1st half we were 2-1 down with lot of fighting spirit trying to come back.

2nd half started and we let in 4 goals in 10min which really bring the team spirit down but nevertheless we started fighting back with a good run from Ryan down the flank to find Toby for him to make it 2-6. Cedric won a penalty but Toby step out to take the kick but to only find outside of the goal.

penalty miss and before we know we let in 2 goals but the guys never stop fighting as Raihan scored 2 beautiful goals assist by Conor's and Ryan.

A good game for us to learn from and not to give up easily too.

Rasyid was the capital and is MOM goes to Ryan for his outstanding performance.. 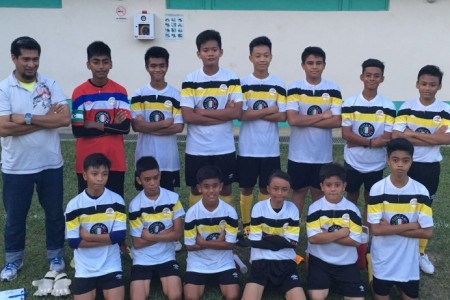 Playing in the hot afternoon sun, our boys conceded the first goal in the 11th minute. Muhammad Syafiq pulled one goal back for us in the 13th minute to restore parity and added another one in the 18th minute to put us in front at the break.  A corner straight from the kick off resulted in our third goal and a hat-trick for Syafiq. He was however not done yet and notched another goal seconds later straight down from the opponents kick off. Muhamad Danish then further extended our lead in the 33rd minute.
Mohamed Ameer playing upfront in the second half added another goal 3 minutes later to make it 6-1. Espzen SS Blacks then pulled a goal back before Shameer made it 7-2 in our favour. We then conceded a penalty in the softest manner but luckily our substitute goalkeeper Ilhan Faiq did enough to throw off the taker into putting his spot kick wide. Espzen did however scored another goal to make it 7-3 before Danish finished out scoring by harrassing and rounding the opposing keeper to make it 8-3. We then had a few other opportunities to add to our tally but for some wayward finishing. Espzen then scored another goal to bring the final score to 8-4 on a satisfying afternoon for our boys. Kudos to the boys with special mention to Danial who despite being changed to several positions during the game gave his best all the way.

A good game for both teams with no major incidents to report.