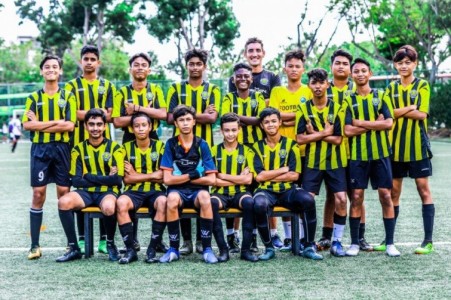 The result was emphatic but the performance was not the best. A few changes in personnel meant a slow start for the ESPZEN Black team as the players were trying to gel in the first 10 minutes.We could have found ourselves a goal down if not for a great double save from Kaelen in goal and there were other moments especially from corners which caused concern..

The double save from Kaelen seemed to spur the team into action as literally a minute later the ESPZEN black team took the lead with a very good finish from Sanjith. The ball was bouncing awkwardly but he managed to get enough power and direction to loop the ball over the on rushing goalkeeper. The team played in fits and starts and struggled to get our usual passing game going. To GFA's credit they played some nice football and made it hard for us but the key moment was adding the second goal. Is played the ball into Sanjiths path from a long punt from the goalkeeper. Sanjith beautifully danced around the goalkeeper to put the ball into the empty net.

Even though we were 2-0 up the passing wasn't our usual standard. Grihith added a third before half time with a scruffy effort. The scruffy nature of the goal summed up the first half performance. Second half we improved a bit as Grihith added a 4th as he found himself clean through. Is on his debut made it 5-0 with a clinical finish into the corner and there could have been more goals added, but that would have flattered us.

Overall, the hugely positive thing is we still won convincingly even though we played not to our best. Kumar in the midfield and Erfan at the back (especially in first half) held it together which meant we could go onto win the game. Still a lot to work on, especially decision making in possession and movement off the ball to create space for our midfielders but a great start to the season. Hopefully we can keep the momentum going into the next game.