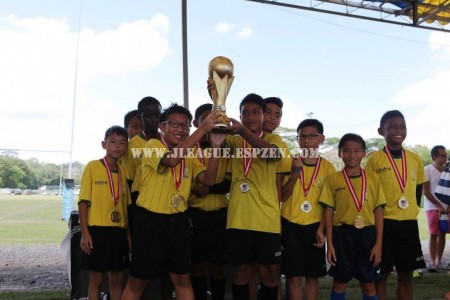 With the top 3 separated by 1 point, it seemed that it will be a neck to neck finish to decide the final champion.
Fourth place SCC was not out of the title run as well as they were just 5 points away from the top position but with 3 games in hand!
Match day #5 with pitch third place YG2K against the fourth placed SCC in 2 consecutive games on the same day.
This was the first time both team meet in the league.
The boys started the game brightly and almost have gotten a goal. Aniq released Rindra on the right and he found the on-rushing Mohamed , who did well to push the ball past the keeper.
The retreating last man somehow managed to stopped the ball on the line.
SCC’s boys (and girls) were technically skilful and organised. There were 2 girls in the team that were really impressive and match up very well with the boys in term of skill and speed.
They settled down quickly and tested Travis with a very good long shot. Travis was very composed and did very well to stop them from taking the lead.
It was a tussle in the middle from them on. Rindra, Naufal , Mohamed played very hard to try to have a grip in the middle.
Speedy Ridwan created some problems for SCC’s defenders with his trickery and speed.
The breakthrough came when Mohamed and Ridwan pressed very high to pressurised right back to make a backpass, which rolled to Rindra.
Rindra controlled the ball well and drilled it into the net to make it 1-0.
Second goal came shortly after but there was some fortune in the game.
SCC’s midfielder attempted to thread the ball past Izzy to their striker. Izzy did well and cleared the ball with power before the ball rolled past him.
The ball somehow floated high and far beyond the reach of the keeper into the net.
2-0.
SCC attempted to fight back but Aniq and Izzy were outstanding throughout the match.
There was a one-on-one situation when the SCC striker managed to find some space on the left but Travis bravely dashed out to stop the shot.
It was fair to say SCC got more scoring chances after the second goal but the boys were very disciplined , defending well as a team from the top to the back.
A good and difficult win earned against a very good and tough team.
Final score: 2-0 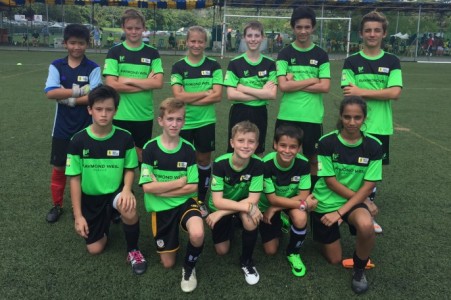