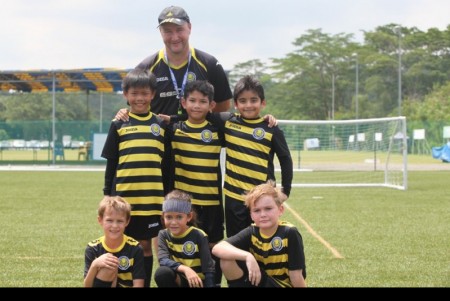 A real "humdinga" of a game.... a fantastic game for the neutral, but a real nail bitter for those connected with both clubs.

This was an important game for both clubs, ESPZEN Black hoping to secure the inaugural title, and for Chelsea were hoping to keep their title dreams alive.

ESPZEN players were aware of the importance of the game before kick off, and Captain Kristofer lead the team onto pitch with determination.

Chelsea adopted to play a high energy pressing game, giving ESPZEN players little time on the ball, and trying to force errors, in the first minute however the ball passed through the the Chelsea forward pair and found Ethan who sloted home. 1-0. Chelsea continued their fast press, and within a few minutes raced to a 3 - 1 lead, as ESPZEN Black players simply couldnt find their usual passing rythm, and furthermore the Chelsea team were first to nearly every ball especially from ESPZEN goal kicks.

As the game progressed lots of overloads took place, Chelsea attacking with 3 players forward against the ESPZEN defense, and then when the attack broke down, ESPZEN would have an overload against the Chelsea defense, hence it was real end to end action.

ESPZEN came back from 3-1 down and 4-3 down to eventually win the game 5-4, however the game could have gone either way, with both teams scoring some nice goals, but equally the woodwork and goalkeepers made some good saves.

Upon reflection, a great performance from ESPZEN in terms of effort, and never giving up against a turbo charged Chelsea Team, however from a football performance perspective we were unable to play our usual game and we gave the ball away far too easily at times, putting pressure back on ourselves.

After the game, Captain Kristofer was asked to review team performance and he made some wonderful observations

1) The team didnt squeeze when out of possesion.... providing the Chelsea team with too much space down the middle 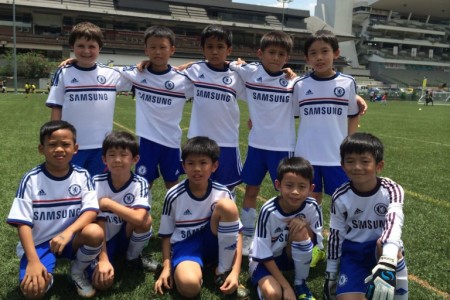 As expected, another thrilling football against ESPZEN Black. The first goal came in as early as the 1st min from ESPZEN which CFCSS SG equalised in the 2nd min from Jayden Goh. From then on, our boys managed to push forward and keep a good shape as a team which resulted in Atabek Sultan and Yazid Rizal getting our second and third goal in the 6th and 10min respectively. The boys showed great composure and good team spirit before ESPZEN pulled one back in the 15th min to make it 3-2. Once again Yazid Rizal who had an excellent game on that day came up with a supeb shot in the 25th min to put CFCSS SG 4-2 up. A quick successive goals from ESPZEN right from the restart made it levelled at 4-4 in the 26min and the final goals for the match came in the 31st min to sealed up the game for ESPZEN. Overall our boys did well as they managed to keep ESPZEN from their free flowing passing game and they worked tirelessly for one another as a unit but there's work to be done defensively as a team.