A fantastic effort from the U8 whites who played a very strong SG Lions team. With only 5 players and the boys playing their first game together it was always going to be a tough ask against formidable opponents. The Whites played their hearts out and left everything out on the pitch. After a very difficult start to the game conceeding 6 goals in 6 minutes, the whites grew in to the game. Arthur Taylor performed heroically in goal for the first 15 minutes and later did well playing out in the field. Umair Ahmed in defence was strong and made some crunching tackles to repel the SG Lions constant onslaught.

The lions were relentless and in the second half kept coming at our defence and without being able to make any subsitituitons the work rate and enthusiasm of Louis Mourad, Yuchen and Norman Raffort ensured the team got a goal in the last minute which they thouroughly deserved. Arthur Taylor who never stopped running all day played a perfect pass through to Umair Ahmed who steamed through to finish the ball with a powerful left foot shot in to the bottom corner. Even though it was a tough scoreline there were plenty of positives to take from the game and improve on in the upcoming matches.Congratulations to SG Lions also on a some fantastci football. 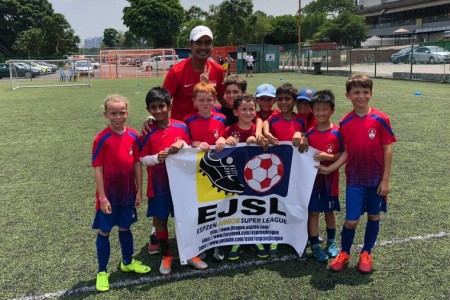