It was a good day for ESPZEN who were in good spirits after two recent victories & with a full squad to choose from. An early goal from LFS sparked the boys to life who responded a minute later with a great goal, playing back, switching play and working the ball into the middle for big Ryan to finish well from distance. ESPZEN created lots of chances but the stand in LFS goalkeeper made a number of excellent saves. A number of wonderful goals followed with some great football being played out from the back. Ethan Wong had a great day infront of goal bagging himself a hat trick. ESPZEN pressed well high up the pitch, forcing LFS to give the ball away & creating some good chances. Only room for improvement in the first half was communication & scanning to pick up runners in the box & our defensive organisation from throw ins. This was inevitable with a number of our regular defenders missing.

ESPZEN had a sloppy start to the second half by giving the ball away too often which invited LFS to play on the counter. This soon changed as ESPZEN were able to kick start with some free flowing football which resulted in a number of chances and goals being scored. Thanks to our opponents, LFS, who played the game in great spirits and were very sporting throughout. Well done to the ESPZEN team. Let's keep this up & finish the season with some more strong performances. 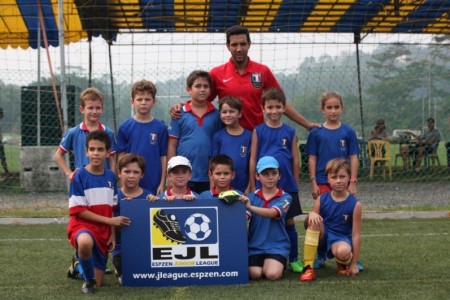 Difficult match for us as most of the team was playing a match just before.

ESPZEN U14 's Man of The Match