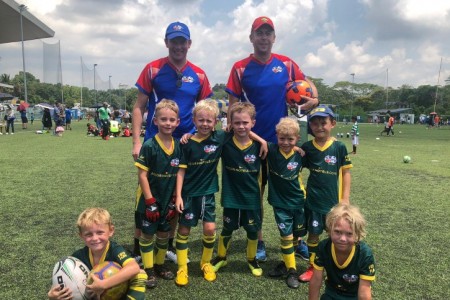 Another fortnight another double header for the ANZA boys.

7 young men turned up for the green and yellow to face F-17 and Sporting Lisbon.

F-17 were first up and were fired up looking for revenge for their narrow defeat by ANZA last time out.  The ANZA boys were relaxed in their warm up, several preferring to shout 1,2,3 waffles rather than the team name in the pre-game war cry.  It was all going to be so easy, and fun, they thought.  They would think again.

ANZA started with Will and Hugo on the bench and Darragh in goal.   Darragh made an excellent early save with his foot to deny an on-rushing 17er.  Not long after Jacob found the back of the net with a crisp strike after being set up Monty down the left.  2 minutes gone and 1-0 to ANZA.

Monty probed and harassed the opposition down the left flank both offensively and defensively.

Sam time and again showed his class reading the game from the back and thwarting the 17ers with last man tackles. It was a tough game and Darragh was called on several occasions to save the ANZA boys.  Hard tackles flew in from Ari.

Ari was tee’ed up by Monty but could not connect in front of goal.  There were opportunities aplenty.  However the 17ers were also looking threatening and on 12 minutes an uncharacteristic failure to clear the ball by ANZA let in the 17 attackers for an equaliser.  1-1.

Things immediately got worse as straight from the re-start the ball ANZA was robbed and it was 1-2.

ANZA kept pressing with Monty and Ari oth having shots well saved by teh F-17 keeper or blocked by their startdefender who seemed always to b in the right plae to block shots.  At the other end Darragh was kept busy and up to the atsk.  However, another poachers goal left it 3-1 with about a minutes to go before the break.

The game remained open and Jacob put in a great couple of crosses but no one could connect.

A midfield scramble saw Ari push the ball wide to Monty who hammered it in from a tight angle.  ANZA were still in the game and went in 3-2 down at the halfway mark.   Ari and Sam came off, Will and Hugo on and Jacob went in goal.

The second half started fiercely as the first with combat in midfield quite intense.  It was too evenly matched sides fighting eachother.

Jacob sent a couple of great passes down the line and through the middle.  William marshalled the defence effectively.

A midfield scramble early on and the ball fell fortuitously to an F-17er to power forward and score. 4-2 to the !7ers and ANZA had a steeper hill to climb.  That soon became a mountain as from the kick off the F-17ers for the second time robbed the ball went straight up the other end and scored.  5-2.   Déjà vu as the same thing happened immediately again and suddenly ANZA trailed by 4 at 6-2.

The game was not over as a spectacle however and hard tackling continued and there were shots at both ends.  Darragh almost found Hugo with a perfect pass.  The pressure from ANZA paid off however as Darragh scored from a Monty corner to claw one back to 6-3.

Any thoughts of a comeback were soon quashed however as another F-17 attack made it 7-3.  So it ended.  A valuable lesson for the ANZA boys.  They were out fought in parts and lacked focus in defence and this cost them dearly. 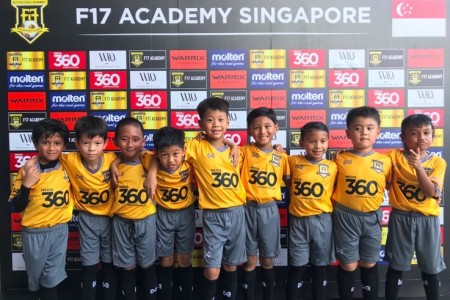 A Great comeback from the players, weeks before this game having a tough fight against 2 teams which they drew & lost. But that didn't stop the players to keep on trying & working hard during training.

On Sunday, 24 March 2019. They won the game, a fair fight from both teams. The F17 U7 Team, played at thier best, taking any chances whenever they can to get the ball on in the net.

They deserve a great victory & hoping to maintain or be better. Overall, good job players, keep it up!

ANZA1 's Man of The Match