Both teams created a few chances early on, with ESPZEN's Alex and Sanat playing a one-two and Sanat crossing an excellent ball into the box with Ryan firing wide under pressure from the defender. Singapore Soccer Academy had a great strike from distance which was well saved by Ethan. Singapore Soccer Academy then took the lead in the 19th minute with a well struck free kick from distance. ESPZEN responded a minute later creating a chance with Kaellen dragging his shot just wide after working the ball into the box. Just two minutes later ESPZEN had another opportunity with Max driving forward from midfield and going close with a shot from the edge of the box. 1-0 at half-time with ESPZEN not at their free flowing best in possession as they were well thwarted by a physically strong Singapore Soccer Academy.

Singapore Soccer Academy made a quick start to the second half scoring after just 2 minutes and 40 seconds after driving into the box and finishing well. Just three minutes later it was 3-0 with a well struck free kick from distance. ESPZEN were trying to force the play centrally too often in the first half with their visual field being narrowed due to good pressure from Singapore Soccer Academy. They were able to switch the play from left to right and right to left a number of times which was more effective due to their opponent being so compact centrally. ESPZEN's Alex kept going throughout the game, always asking for the ball and driving forward and causing the opponents a number of problems. ESPZEN got caught playing from the back with Singapore Soccer Academy regaining possession high up the pitch to make it 4 before adding a 5th later in the game. A tough lesson for ESPZEN on the day which they will learn from moving forward in terms of where their focus should be to enable them retain possession better and focus on their own performance. Well done to Singapore Soccer Academy! 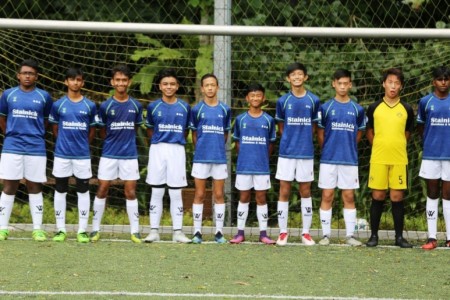 ESPZEN U14 's Man of The Match