Even our team players are smaller than Espzen players. they have the strong heart for trying to get goals. Working harder and harder. They improved to use the space and pass soccer. Koki got a goal with strong shoot. It was given us the excitement and high motivation to all of players. During this season 9, quite tough all of the match, but we had improve a lot. Thank for this opportunity. 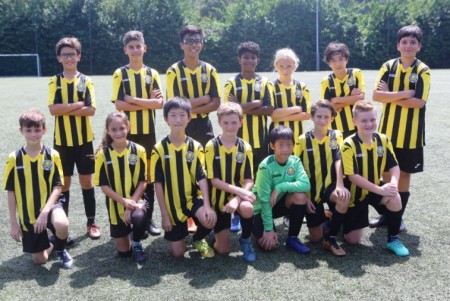 last game of the season and we had to score 2 more goals than EJ to become champions, alas it wasnt to be as the woodwork, some brave defending and great goalkeeping from FC Jepun keeper meant the score line was tight.

A full squad today, but we managed to give all players plenty of pitch time and whilst it wasnt our strongest performance, we created plenty of chances and perhaps should have been 4 or 5 up at half time.

Second half it took a while for us to regain the lead, and then with the third goal came some hope..... but it wasnt to be today. As a team we were unbeaten for the whole season and every player has improved.... The team has a strong spirit and work hard for each other.... lots of areas to improve and sharpen but for today we will reflect on a solid season where we played the ball on the ground, opened up in possession and tried to keep the ball.... we didnt always suceed but the seeds have now been planted...... which we will continue to water.

Thanks to all the parents for your wonderful support this season