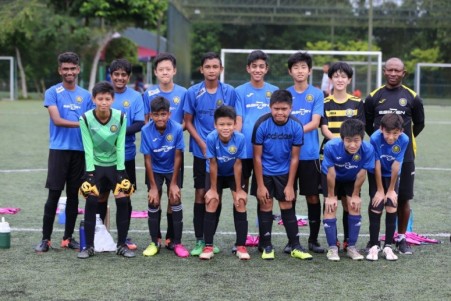 The win came despite the team being severely

Depleted by injuries. Only 10 players were available for this game which took place under the blistering afternoon sun.

The game started with ESPZEN Black controlling the early exchange as Sporting Lisbon took time to settle down. ESPZEN Black had several attempts on goal but none found the net in the opening 15 minutes.

The hot weather and lack of substitutes soon saw ESPZEN Black take their foot off the accelerator, allowing Sporting Lisbon to gradually worked their way back into the game.

Sporting Lisbon had a few attempts at goal themselves but could not find the net. As the teams settled down, it was soon clear that it would be a game between Sporting Lisbon's technical strength versus ESPZEN Black's strong defence and swift counter attacks.

The second half saw a balanced game with both sides having chances but in the 50minute, ESPZEN Black took the lead. From a corner kick on the right that saw Sporting's defence failed to clear the ball which was headed into goal by ESPZEN's Jericho to make it 1 and the only goal in the game.  In the closing 15minutes Sporting tried to find a way back into the game and had a few good chances. However ESPZEN held on to clinch a hard earned victory.

Haidher was the captain and is MOM goes to Ethan for standing tall from start to the game and another good game for him.