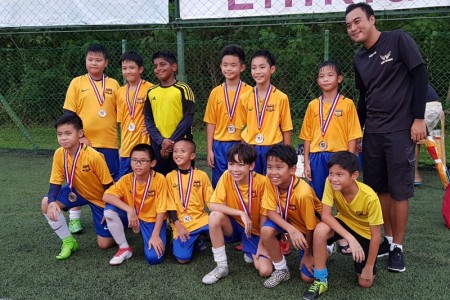 The second of three matches this weekend saw the Boys playing the reverse fixture against GFA Singapore. The coach decided to give the front players a rest from the previous match and started with a new backline comprising of Shachin and Valens, with Russell in goal, Mikhail, Isaac and Ryan in the middle and Aiman in front.

Again the opponents started on a brighter note, managing to break through the Boys defence within the opening minutes to shoot at goal. Russell however was alert to the danger and saved comfortably. Nevertheless, the next few minutes saw the Boys scrambling to defend against their somewhat smaller sized but skilful opponents.

Eventually, the team settled down, with Mikhail taking control of the middle and began to release a series of passes down the wings for Ryan and Isaac to run at their opponents.

In the 5th minute, the results bore fruit. A midfield tussle results in Aiman winning the ball in the middle. He spots Isaac free on his right, and slips a ball through. Isaac takes the shot which the keeper manages to push unto his right hand post. Ryan, instinctively following up the shot had the simplest of chances to slip the ball into the goal for the Boys to take a 1-0 lead.

Having taken the lead, the Boys confidence was up and they began to probe even further for more goals.

Several minutes later, in an almost identical situation, the Boys went 2-0 up. GFA’s attack down the Boy’s right wing was broken up, with the ball swinging over to the left. As the GFA defender stumbled over the ball, Aiman was quick to rob the ball before setting down the middle. A quick look up to see Isaac was free on the right was followed by another through ball to Isaac. Isaac’s goal bound attempt was saved and then spilled by the keeper, and yet again, Ryan was alert and opportunistic enough to follow up with his second of the match.

A minute later, and the Boys were 3-0 up. A corner taken by the Boys was only half cleared to Shachin. He spotted Aiman free on the left and slipped a quick ball to him. Taking the ball on his right, he made space for his shot at goal and was rewarded with his first for the game. Kudos to Shachin was spotting the free player and playing the pass.

In the 12th minute, Aiman then showed his determination and persistence. A GFA attack was stopped and the ball was played to their right-back. Aiman hassled and forced a mistake from the defender, who lost the ball to him. Aiman quickly made a beeline towards their goal, moving towards the right before slipping the ball pass the keeper for the Boys’ fourth goal of the match.

Midway through the game and the coach decided to replace Valens with Wei Jian at the back. This was followed shortly by Mikhail, Aiman and Ryan all coming off for a well-deserved rest, bringing on Damien, Felix and Marc.

Shortly after, a corner from the Boys was well caught by the opposing keeper. Unfortunately, his throw out was intercepted by Felix, who smartly slipped the ball into the net before anyone could react, 5-0 to the Barker Boys.

The last few minutes of the game saw the Barker Boys exerting even more pressure on their opponents but were unable to add to the score line. The game finished 5-0 in favour of the Barker Boys.

MOTM award for this match goes to Ryan Lim. Not only did he bagged two predatory goals, but he also put in a huge shift, not only when attacking but also when he needed to defend on the left to support the team’s defenders. 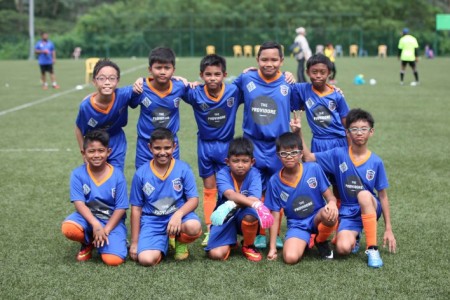