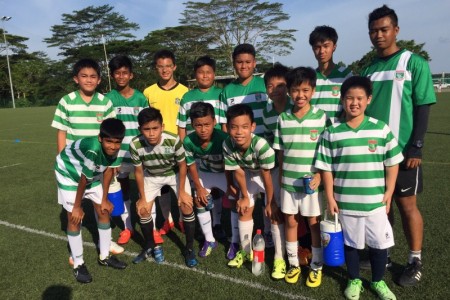 A decent squad mixed with the U12 and U14 players, with only 9 players on and no Sub it going to be a strong fight from us... Game started with Jonathan in goal, 3 back line with Joshua  Roshan and  Ishaan while  Isaac and Lionel and Axel’s and Ira in the mid while Conor’s up front..from the start we took it to SMAM  and in 7min gone a good play in the mid from Lionel to Isaac for him to find  Conor’s for Conor’s to score his first league goal,with lots of tried legs its was going to be a hard one but the guys never give up,SMSA put 1 in to make it 1-1 and with time flying and lots of chances flying Conor’s was able to make it 2 from Lionel pass and he took it well.another good game from all the guys for taking the 3 point home..Thanks to SMSA for a good game and we looking forward to meet you again soon..MOM goes to Conor and Ira for standing toe to toe not showing their tried legs at all..