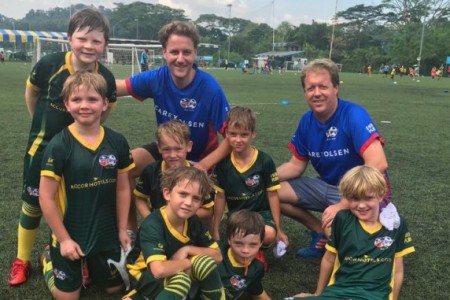 The boys were riding high after their first game but came upon a much more organised opposition in First Kick Academy. Their defense was solid and it was proving difficult to get past their keeper. Nicolai scored our only goal in a crowded goal box but was determined as ever to see the ball get past the keeper and into the back of the net, CROWD ERRUPTS. Unfortunately we didn't have the passing game to match the oppostion and end up losing 1-4, it would have been a much greater margin if it wasn't for Johnny Pattman in the goal, countless saves both on the ground and in the air and even a diving save much to the delight of the very vocal ANZA crowd. Well fought out ANZA.

ANZA had many players to utilise and they did it well. Despite their advantage in size, they did not play aggressive yet were sporting and played fair. Their coach were also very supportive when our GK made good saves. Good team to play with!