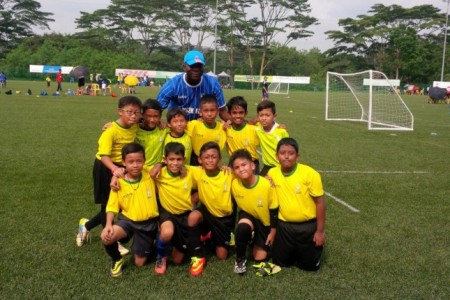 A sudden passing shower had cooled down the field and it was good a great weather to play soccer.

YG2K started with Izzy and Aqil at the defense with Fauzan protecting them.

Nazrul and Adi provided the thrust on both flank and Ridwan leading the frontline.

Travis is manned the goalpost.

AFF was well organised and disciplined and have some very good players.

Both team started the game battling for the control in the midfield and both team had good chances.

The breakthrough came with a brilliant display by Fauzan.

He read the pass of AFF midfielders well and intercepted the ball and charged forward.

Seeing that the defenders are drawn towards him, he lay the ball for Ridwan to slot past the goalkeeper.

The next 2 goals followed the same script with Fauzan breaking AFF's attack and unselfishly laying for Adi and Ridwan to make the scoreline 3-0.

Jonan came in for Nazrul. He received a pass from Adi from the right, and with a sidestep to go past the defender and a crisp, unstoppable striker into the bottom right hand corner.

Adi scored the final goal. After dancing past two defenders and into a one-on-one with goalkeeper at the right, he managed to squeezed the ball into the goal through a tight angle. Our boys need to get tougher and react to the ball quicker and faster especially against a physical team. We need to learn to use the space and play our passing game. If not for the saves made by Man of the Match, Arjun - the scoreline would have reached double figures.

AFF 's Man of The Match