After the cancellation of our game v F-17 two weeks ago, the fixture was re arrange for Sunday 6th May. Unfortunately, with the change ESPZEN u11’s final game of the season had to be played with 8 players.

The 8 players did an amazing job in the extreme heat. Special mention and thank you goes to Charlie and Nils for agreeing to go in goal for a half each. The goalkeeper is a specialist position so can be hard for an outfield player to step in. Both did an incredible job, managing a clean sheet. In games like this I think we all appreciate what an unbelievable season Leo has had between the sticks! It’s a tough position but Charlie and Nils were outstanding.

ESPZEN started the game in positive mood, trying to get the ball down and play attacking football against a deep lying and determined F-17 team. The opening 15 minutes was tight, chances were few and far between. But then some individual brilliance from Nils, Nathan and Jake produced efforts on goal. It was always going to take something special to break the deadlock and it came from the midfield general – Nathan. It was like watching Steven Gerrard, powerfully running at the defence, quick feet with a sharp finish to open the scoring. Eight minutes later Nathan became provider, another jinking run followed by a pinpoint pass for Kyra to charge on to and smash past the onrushing F-17 keeper. Two – Nil at half time was well deserved from the hard working ESPZEN.

The second half started slightly differently, F-17 pushed higher up the pitch trying to claw back the game. ESPZEN withstood the attacks and played beautifully on the break for 15 minutes. Within that time, we scored a goal of the season contender, Isaac dropping of the back post to pick up a bobbling ball. Instead of controlling the ball Isaac adjusted his body position and executed a volley of the highest quality that arrowed into the top corner! 3-0. To finish the season off, ESPZEN scored a lovely team goal started from Nils in goal, a determined run by Charlie combined with a clever pass that realised the energetic Robbie. He drove in from the left wing, combined passes with Nathan before calmly rolling the ball pas the F-17 keeper. Full Time 4-0. Second placed secured on Goal Difference.

Credit to the ESPZEN u11’s Black team, they controlled the game in two different ways. First half was with patient build up play, 2nd half with disciplined and determined defending.

Captain for the day Jan Tze gave the Player of the match award to Robbie, another one to add to his collection. Jan Tze was impressed with Robbie’s energy levels, commitment to the team and the fourth goal to finish off a very good, high tempo performance.

The season comes to an end with ESPZEN finishing in 2nd place on goal difference, 1 point behind league winners Sporting Lisbon. The players have been a credit to the club this season, they have had two coaches, new training methods but have adapted brilliantly. Every match day they give their all, in hard conditions against some outstanding team. Well done to all involved. 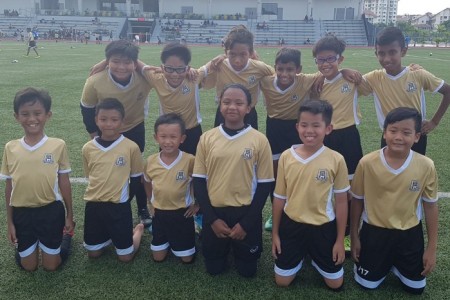