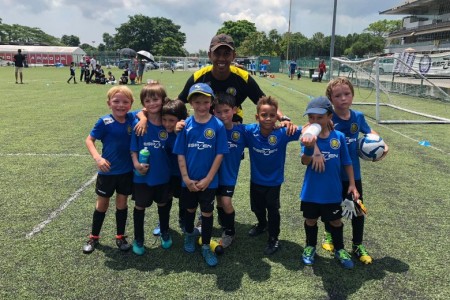 Team Warmed up and ready for the game against First Kick academy.

Players briefed on each individual position before the game. The team played well in the middle of the park, keeping possession of the ball as much as they could. Using the flanks to penetrate through the defense line. The players did well in keeping the ball and trying their best to convert it into goals.

A communication break down at the back caused us to conceed the goals. The team fought hard to covert opportunity to goals. Leonardo Brosio got the first and only goals at the 18th minute. Overall, it is a good game played by both team.

Captain Monty led the team well, showing leadership in the game and giving the team the motivation they need.

MOTM was given to Leo by the captain.