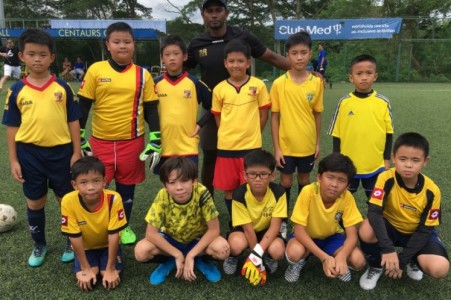 Last game of the season for the Boys. The coach once again set the team up in the same formation with Valentin between the posts, 2 defenders Valens and Wei Jian, 3 midfielders, Ryan, Mikhail and Marc, with Aiman at the tip of the spear. Unlike the previous game, the Boys got off to a quick start, and in the very first attack, Aiman quickly broke through to score and put the Boys ahead in the very first minute.

The game then quickly became a chess match, with the opponents matching the Boys with skill and determination to break down and close gaps. The opponents were also able to launch several sustained attacks of their own, but the team's defence held in place, and on several occasions managed to launch counter-attacks by skilful use of the ball either down the wings, or through the middle.

As the heat of the afternoon began to take it's toil, the coach made several substitutions in the front and it almost immediately began to pay dividends as Damien grabbed 2 goals in quick sucession, followed by another from Felix. Damien finished off the first half with a simple header off a corner. In between, Valentin was called into action twice as a Barker Boys corner routine did not work as planned, and he was faced with a one-vs-one situation with the F-17 forward.  The referee blew for half time shortly after, with the Barker Boys taking a 5-0 lead into the break.

The second half began with roughly the same team which finished the first half. Coach Gary's approach was once again to play and keep the game simple. Pass the ball around and not try to force play in areas of the pitch which was already congested.

The Boys took some time to settle down and there were some hair-raising moments when the defenders and keeper played the ball dangerously around their own goal mouth. Fortunately, the F-17 players were unable to take advantage of this to score. Isaac also showed great reflexes to save several shots which were goal bound. Gradually, it took a few minutes before the team settled down and started to play its normal game with Marc charging down the right wing, and Ryan doing likewise on the left/centre.  Mikhail also played his part in the centre of the midfield by harassing and closing down the opponents where possible. This soon resulted in Felix picking up another goal for the team.

Credit to F-17, they did not give up nor closed up shop. Their players were game to come out and play. This paid off shortly after. Their goal keeper launched a goal kick, which was not adequately dealt with. From this, they carved open opened an opportunity on the left to shoot and managed to score a goal to reduce the deficit.

Normal service was soon resumed, with Felix and Aiman getting unto the scoresheets with well taken shots at goal. Felix also managed to add another with a mazy dribbling run through the middle, before finishing off with a shot off the outside of his right foot  into the goal.

Even then, the F-17 team continued to come out and managed to create several chances to score but the Barker Boys defence held firm each time, either with tenacious defending from Valens or Dan, or by calm passing and control by Wei Jian.

Towards the end of the game, the F-17 team managed to fashion a corner, possilbly the last chance in the match. However, the corner was adequately dealt with, and from the ensuing quick counter-attack, Damien finished off the move, match and competion by scoring the tenth goal with the final kick of the game. This brought a successful conclusion to the match and the league competition as the results mean the Barker Boys should finish at the top of their league.

The coach nominated Wei Jian this afternoon to be the Man of the Match, for keeping the ball well and playing with good composure. He also showed several good touches and decision making at the back most of the time.

Special mention must also be made of the F-17 team players who never gave up, and continued to play good football all the way towards the end. They also showed some good flowing movements and passing to give the Barker Boys a good match overall. 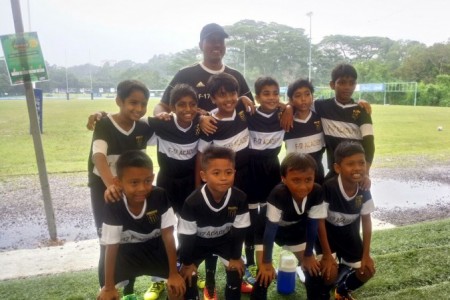 Matchday 7 saw us drawn to face the league champions in the sweltering afternoon heat. Barker Boys played good football to win the match comfortably, underscoring their stature as the best team in Div 2 by some margin. Credit to the boys, though, for never giving up and not backing down as they faced this stern test of ability and desire. Every single player ran himself ragged trying their best for the team. To be fair, we created good opportunities, which was encouraging. We found some joy early in the second half when a good counter-attack culminated in Sashvin playing Samar through with a lovely chipped pass, the latter finishing with aplomb. But our opponents defended skillfully, repelling countless attacks thereafter and even increased their lead. This was a good game of football played in the right spirit of the game by both sets of players, with wonderful supporters all round the pitch. A great example of what youth football can and should be like. Congratulations to Barker Boys on winning the League and illuminating the season with wonderful football, encouraging supporters and great attitude to match.