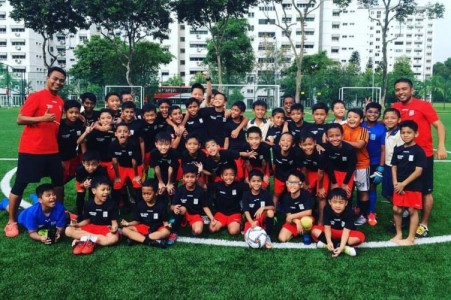 The pattern of play was evident from the first whistle with White Sands attempting to have more of the ball with a slower and more deliberate build-up while Sporting was intent on using their speed, aggression and strength to their advantage.

This resulted in several chances for Sporting early in the game with the Sporting players very quick to send the ball forward and they took many shots at the White Sands goal. Sporting's efforts in their high press paid off when an attempted pass from White Sands keeper, Hariz, saw the ball intercepted by a Sporting player who laid it off to a team-mate who then slammed it into the bottom corner. Only minutes into the game and White Sands were already trailing the game 1-0.

White Sands made a key reshuffle, pulling Yazid into the back 2, partnering the magnificent Elfie. With this shape, White Sands were calmer in possession and managed to string more passes in a row while shifting the play from one side to the other. Yazid was instrumental in his role to create from deep and it freed up the forwards. But Sporting certainly did not make things any easier. Sporting remained compact and resolute and were very competitive in every duel.

The boys in white remained undeterred even though they had several chances fizz inches wide and had the ball agonisingly hit the post twice. Sporting replied with swift counterattacks and racked up more shots at goal than White Sands did.

Finally, the breakthrough came late in the game when all 7 players combined with at least a touch each in a flowing move to create a glorious chance for Joaquin who finished at the far post.

White Sands kept going at it and completed the comeback with Joaquin once again after being fed through by Yazid.

Credit to both sides.The boys were very competitive, sharp and the teams were so evenly matched that they almst cancelled each other out. But kudos to the White Sands boys who really showed that a primary school team can certainly compete against elite academies, and sometimes even outshine them. That was certainly the match of the season.