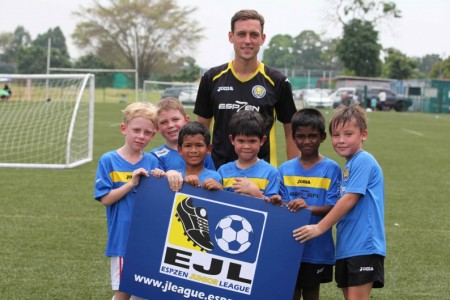 Today's match was always going to be tough, against some of the best young Singaporean players in the country. ESPZEN Blue had come together at the beginning of the J-League Season 2 with the aim of forming a great team spirit, understanding the tactical roles and responsibilities, and to adopt a pass-and-move style with the aim of creating goal scoring opportunities. To date, we have been steadily working towards these objectives, with the signs looking positive so far.

Hong Kah JCOE, like ESPZEN Yellow, were going to challenge our progress so far, and the result at the end of this match suggests they did it emphatically. While Hong Kah deserved the win and played some excellent football, most of the goals scored came through Blue trying to play out from the back. Specifically Blue's goalkeeper looking to play to either the defender, playmaker left or playmaker right. Hong Kah were quick to intercept numerous attempted passes and scored from these. But it shows the intent and ambition of Blue to play the pass-and-move style depsite the pressure exerted on them. Plenty of opportunities for each of the players to learn, not least how to react after conceeding a goal. Namely, to re-focus on the objectives and to go again with a positive attitude.

Eventually the persistence and hard work paid off, Blue scoring two goals through Teun and Sam. The sheer determination of both players, with the excellent support from the sidelines, gave the team a small consolidation for their endeavours. The weather (hot and sunny) combined with 2 players missing for the weekend (Cian and Marcelo) meant that with only one sub, Blue to their credit showed how well their performances are developing. With development in performance, results will eventually come. Building the foundations of team play, technical proficiency and tactical understanding will give these young players the platform to go higher and further as they mature.

Plenty of positives all round, plenty of learning opportunities too, and a new set of opponents coming up on the next Match Day in order to continue this development.

Unfortunately Captain Emilio had to depart early due to illness and was unable to give his Man of the Match. All the players performed admirably, and each had an impact on the match in their own way. However, in Emilio's absence Coach Will chose Teun as MOM for his energy throughout the match, his willingness to play in all positions, and his contribution in creating goal scoring chances. 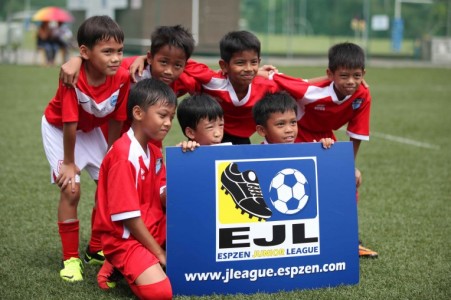 The Hong Lites maintained their perfect streak in the ESPZEN J League U9 Championship Division with a resounding 14-2 victory over teh ESPZEN SS Blue side. The 'hunger' displayed by the Hong Kah JCOE side, after a month's break  was clearly evident in the early stages of the match with the Hong Kah Lites racing to an unassailable 6-0 lead within the first 12 minutes. Subsequently, the Hong Kah boys displayed their full array of running, dribbling and shooting skills coupled with sound tactical awareness which was rewarded with their biggest goal haul in a single match in the ESPZEN J League. The final score stood at 14-2 with precocious Hendra Erza being voted as Man of the Match. Despite the blistering mid-day heat, the 5 man team of the ESPZEN SS Blue kept their heads up and spiits high, continued plugging into the Hong Kah defence and managed to score 2 consolation goals