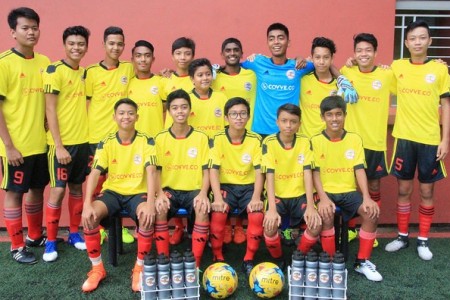 Second game for FC You9ted against a tough opposition who are bigger and older. Missing two key players for this match but the rest of the boys stepped up and lessen the impact. Shameer put us in front in the 15th minute with a well struck shot. We then had a few chances to increase the lead but opposition defence somehow managed to steer the ball away. The team lost a bit of shape early in the second half and required a good save from substitute goalkeeper and debutant Darren Lin to keep the score intact. However a failire to deal with a bouncing ball saw the opponents equalise on the hour mark. Shameer restored our lead with a low shot to the left hand corner six minutes later and added his third in the 70th minute through a penalty after Mohamed Sri Alfandy was bundled in the box. The team then see off the threat of the opponents to make the final scoreline of 3-1 in our favour. Captain of the day was Luqman Hakim and the man of the match for us was Adam Idham Darryan who was running the midfield in Syafiq's absence. Another three points against tough opposition and we look forward to our next game in a fortnight.