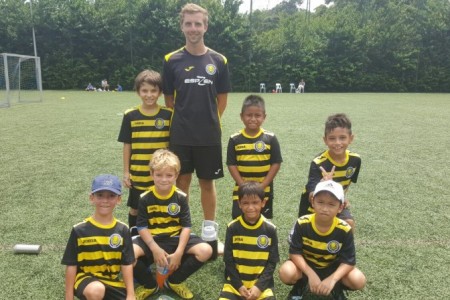 ESPZEN's yellow team played their first game of the season in difficult circumstances, heavy rain and with four players. However, they rose fantastically to the challenge against F-17. The game started very closely, with ESPZEN perhaps edging it but the scores remaining goaless. The breakthrough eventually came through captain Vidur Chopra after some good work by Izak Williams. Vidur then quickly doubled the lead before Izak added a third. After the water break, Chritiaan Wissing came out of goal and quickly grabbed himself a couple of goals. The second half was diffiuclt for the f-17 team, although they showed a good attitude to not give up and got themselves a couple of goals. For ESPZEN, Luis Antolinhao quickly got in on the goal scoring with a couple of goals, before Christiaan and Vidur completed their hat-tricks. After the final water break, Izak managed to get his hattrick before man of the match Christiaan Wissing got his fourth goal, as well as showing great bravery using his left foot. Luis wrapped up the game by getting his hattrick. Overall a very good, hard working performance.