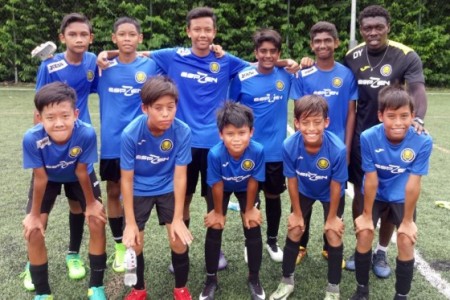 A good start to the new season and going out against Arion Football Academy.

From start we know we need to work hard and stay focus as we know Arion play good football and from start they came all out and we could hold them as we show discipline in every area and the break thou came in the 6min from a thou pass from Rasyid to Fred for him to make it 1 and his 1st for the guys.Aiman added the 2nd before the break to make it 2-0

Half time talk was to stay compact and individuals need to know what to do and their positions and not to sit  back.

Kick off the 2nd half and Arion came out strong  and to pull 1 back to make it 2-1. We pick up ourselves and went out strong and a good drive from Aiman in the Arion area and was brought down for a penalty, Haidher was called to take the kick and a well taking one to make it 3-1 in the 30min .

Both teams started playing some very good football but the guys where all out and Aiman added the 4th before Rasyid make it 5  for Adil to make it 6 and Sean added his name on with a lovely finishing to make it 7,Arion got their 2nd from a penalty to make it 7-2 for the day.

A good game played by both team and a good performance from all the guys too.

Aqeel was the captain of the day and his MOM goes to Aiman for his outstanding performance.

Arion Football Academy U14 's Man of The Match